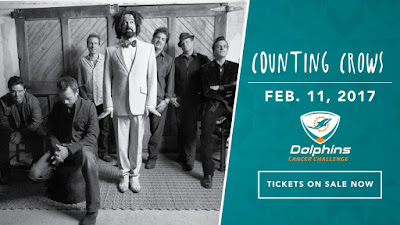 Okay, I am super excited about this one!!!  Counting crows concert, at The Dolphins stadium and proceeds will go towards Sylvester Comprehensive Cancer Center at the University of Miami.  This sounds pretty epic to me.  Tickets are only $32 and on sale now at http://dolphinscancerchallenge.com/

Florida Panthers hockey games are always a good time and tickets are easy to get and generally pretty affordable.  The hockey arena is about a 20 minute or less easy drive from Dania Cut.  There are a bunch of home games over the next couple of months.  Tickets can be purchased on ticketmaster.com

Here is the upcoming home schedule : 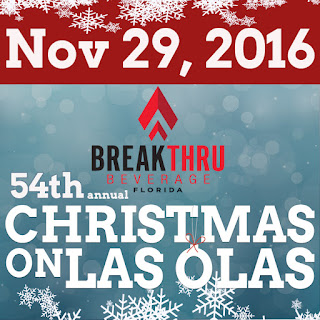 It's that time of year again!  Tonight will be Christmas on Las Olas and just like previous years there will be a snow mountain, an ice skating rink, choirs singing and lots of yummy food and drinks.  The event is being held between 6th Ave and 11 Ave on Las Olas and like always, entry is free!
Posted by Deanna's Blog at 7:49 AM No comments:

This year is set to feature  F-35 Heritage Flight, US Air Force Thunderbirds, an AV-8B Harrier Demo
among many other incredible military aircrafts.

With food vendors covering A1A with a variety of foods from all over the world you
surely do not want to miss the ACTION!


For more information check out http://fortlauderdaleairshow.com/
Posted by Deanna's Blog at 8:16 AM No comments:

'Tis The Season For Live Music!

If you are as into going to concerts as I am then you are in luck!  Check out this list of just some of the upcoming artists performing in the South Florida area over the next couple of months.

February 26 - Fall Out Boy at The Hardrock Live
With this concert being right down the road from Dania Cut it makes for an easy taxi ride back.

March 1 - Trevor Hall at The Culture Room
So maybe many of you haven't heard of him but this guy can sing and guaranteed to be a great/chill night. I will most likely be going to this one, you can get tickets at the door.

March 3 - New Found Glory at The Culture Room
This one is for the "emo" generation.  This will be a fun mix of rock and pop and bring you back to the early 2000.  If you haven't ever been to this venue before it is standing room only with 3 or 4 bars.

March 5 - The Rib Round Up at The Perfect Vodka Ampitheatre
This is an all day country music concert and one I will be attending as it is always a crazy good time.

March 6 - Steve Miller Band at The Hardrock Live
This is another concert I will be going to.  I grew up rocking out to these guys!!

March 10 - Jewel at Parker Playhouse
This one brings me back to high school as I used to be a big Jewel fan in the late '90s early 2000s.

March 12 - Adam Lambert at The Hardock Live
Do any of you remember watching him compete on American Idol?

March 15 - Rihanna at The American Airlines Arena
So I won't be making it to this one but I have heard that she knows how to put on a good show.

April 8 - Pearl Jam at The BB&T Center
Not sure if I will be making it to this one, however, I feel as if everyone I know already has tickets. 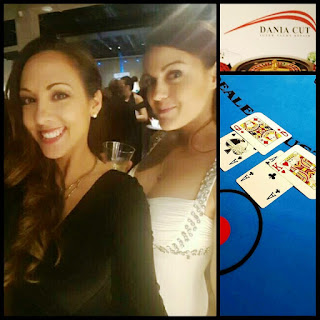 This past Saturday was a great night at the Marine Industry Cares Foundation's Gala event.  Yummy food, great music and a fun time gambling the night away.  More important than it being a fun night, it was all for a WONDERFUL cause raising money for children and families in need.  I love being part of a company that cares and gives back so hats off to Dania Cut for being one of the sponsors!!  If you weren't able to attend, however, still want to be involved in this charity, check out their website at http://www.marineindustrycares.org/
Posted by Deanna's Blog at 10:17 AM No comments: